Please keep in mind that all of the images in Developer's Logs are for "Wanderlust: Adventures", a new title being worked on by Yeti Trunk, and are a Work In Progress; most of them are mockups or early prototypes.

We spent the last week reworking/finishing the Sorcerer class (formally known as the Elementalist). The first thing we wanted to do was get rid of the spell wheel. This has been, by far, the most confusing element for many new players, and we would like to alleviate that initial frustration.

"Will this change make the class less skill based?"
We still want the ranged caster class to require skill - and the Rebirth-Rune System did accommodate this - but we also want to relieve some of the frustrations of people who just wanted to focus on having fun. To that end, we decided to get rid of Rebirth's Rune System and replace it with a simple element 'wheel'. Players can now hold shift to bring up the 4 elements (fire, ice, earth, energy). Left or Right clicking an element will assign that element to the mouse key pressed. This will give players access to a wider range of spells at any given time, requiring skill to successfully utilize them at the right time.

"How will I select and cast the various skill if all I am doing is selecting an element?"
Sorcerers now have to focus on having two elements selected at a time (left and right mouse button). Depending on what mouse key the element is selected on, you can do various spells. To accurately explain this, first I must talk about the new Stances for the Sorcerer.

Magic Stances and how they work:
The Sorcerer has 3 stances that they can freely swap between while holding the shift key: Offensive, Balanced, and Defensive.
So, with stances in mind, once you have an element selected you can do a few things. With an offensive kit selected, you can click to shoot a bolt spell, or you can hold it down to charge a power spell (like meteor, chain lightning, etc). While charging, players move a bit slower, so they should try and combo these charges with stuns, freezes, slows, etc. With a defensive kit selected, players can click to cast a defensive spell or buff, and click-drag to draw walls.

So at all times, players of Wanderlust: Adventures will have quick access to 4 spells (instead of 2 like in Rebirth), and can easily swap between stances to accommodate their play style/the battle. In addition to your 4 spells accessible through your mouse keys, holding shift will also activate Magic Shield, which deflects all damage from magic spells, and even reflects projectile spells back towards the caster.

Offensive Kit:
Defensive Kit:
So with all that said, with the new stance system, players could dish out massive damage and support their team. Sorcerers will now be able to be a healing/buffing class if there is no Cleric in the game. On that note, we have recently been focusing on introducing an ability to heal for each and every character class; this allows for more variety in team composition and greatly enhances solo play. 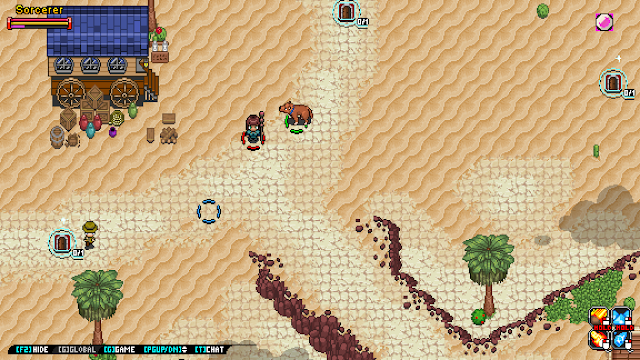 
Throughout development of Wanderlust: Adventures, we have addressed several concerns brought forth by players of Wanderlust: Rebirth, one of which was 'too much clutter during combat' or 'I cannot see anything or tell what is going on'. Here is a list of changes we have made to address this particular concern: 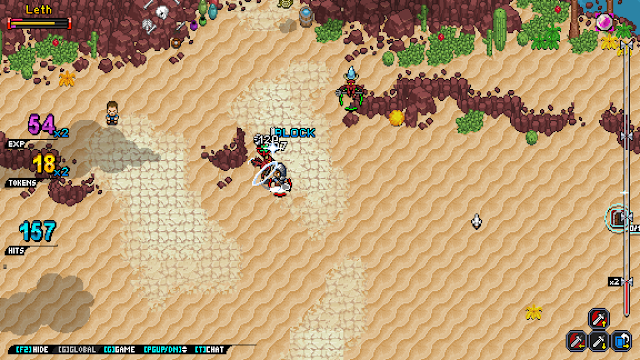 Finally, I have spent a bunch of this week revamping the spell icons in the game. I am aiming for a more detailed, illustrative look. You can see a few in the picture below:


This was a long update, but deservedly so since it's been over a month since our last log was published! Until next time!